It's been years since I last used the KDE desktop environment. Unfortunately, I don't have an exact screenshot of my desktop when I last used KDE, but from memory it probably looked a lot like this:

Looking back I'm not sure the Oxygen theme has aged particularly well, but this picture fills me with nostalgia and so will always have a special place in my heart.

Over the years KDE has (unfairly in my eyes) had a fairly negative reputation, and stereotyped for being quite buggy and resource hungry. I don't recall being effected by these issues described first hand, but hearing critical sentiments like this left me with a negative impression and drove me away from using KDE. So although I do have fond memories of this desktop, they were tainted by the opinions of a few vocal Linux enthusiasts at the time. I was young and impressionable, and wanted to use to use the 'best' thing, even if that meant not being able to form my own independent assessment.

Consequently I was content to stay on Gnome desktop (and various forks) for most of my time on Linux. But that all changed pretty recently. I wanted to revisit KDE and see if this reputation was still warranted. I think part of me wanted to make amends and give some love to a Desktop environment I felt I'd never really given an honest chance.

Largely I was inspired to give KDE another try after seeing some pretty positive recent momentum in the community. A prime example is TechHut releasing this video:

I follow Nate Graham on his blog "Adventures in Linux and KDE" who's posts frequently hit the front-page of /r/linux, which makes developments in KDE impossible to ignore. It's really impressive to see the volume of improvements that go into the desktop each week.

All of this positive sustained coverage culminated in me caving and deciding to see what all the fuss was about.

I opted to install Open SUSE Tumbleweed because I fancied trying out a rolling release distribution and wanted an up-to-date KDE experience without having to jump through hoops. I briefly toyed with the idea of trying KDE Neon, but ultimately wanted something different then another Ubuntu based distribution.

Disclaimer At the time of writing I'm on KDE Plasma version 5.26.5.

I always found the applets on Gnome to be a bit frustrating, and find much great utility from their KDE counterparts. Frequently on Gnome I'd be forced to open up system settings to perform some basic action, like switching/connecting a Bluetooth device or altering specific device volume.

Whereas on KDE applets typically quickly allow me to to perform the required action without having to dive into the full settings. On Gnome there's a patchwork of 3rd party extensions that fill this niche but I find myself much preferring the out of the box experience offered by KDE.

To my surprise everything just works, I haven't had a single issue with multi-monitor support so far. All this is even before some multi-screen improvements due to arrive in Plasma 5.27

Often I'll plug my laptop in to drive a primary display but then close the lip on my laptop, running just one display. When I do this all the windows open on my laptop automatically switch over to the main display.

The Display Configuration Applet makes it really easily to quickly kill the laptop screen and work from the Primary monitor even when the laptop lid is open. Traditionally multi-monitor configuration on Linux has been a nightmare, but this has been working a charm for me.

A small thing that might be possible in other environments, but KDE makes super trivial. I'll often configure this when I have two windows side by side. This sort of mirrors the way I used to use the i3 tiling window manager, allowing me to arrange borderless windwos for maximum vertical space. 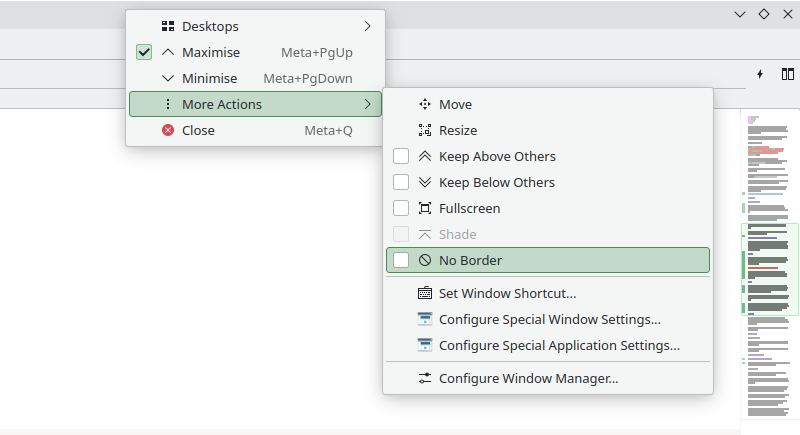 I quickly switched from the default openSUSE theme to default Breeze implementation. I'm a big fan, everything ends up looking nice and consistent across the desktop. The ability to inherit the accent colour from the current wallpaper is a nice touch. Although I do wish there was a nice way to automatically to switch from Light/Dark mode based on the current locale (similar to the way android works).

It's been a while since I tried out this editor and I'm pleased to see it's developed a bunch of useful new features since. Now it's got builtin LSP support, git integration, session support and a quick 'Quick Open Search' fuzzy file searcher. What more could you need from a modern lightweight editor (without reaching for a full IDE).

The comprehensive vi input mode, combined with the rest of the editor experience means it's so good that I'll stray from my typical neovim terminal setup (which is high praise). It would be absolutely fantastic if at some point neovim gets a proper headless mode to allow it to be easily integrated with GUI-editors. If Kate, (or similar) ever developed this feature I'd love to use the editor as a front-end UI for neovim. But I'm unsure whether this is within the scope of the project.

I've had a few issues configuring the LSP integration from within a Python virtual-environment, but aside from this the experience has been very positive.

This one is surprising to me and I'm on Open SUSE tumbleweed, which pulls up-to-date versions of software from upstream repositories. I expected lots of crashes, everything to be bug-ridden, constantly encountering little regressions with each update. I'm pleased to say this hasn't been the case, I've only had a single crash (albeit a pretty serious one) so far which I'll touch on in the next section.

The Not So Good

Most of my experience has been pleasant, but I did encounter a few minor issues, which I've documented below.

When I came to wake my laptop from sleep I was greeted by the following (fairly intimidating) error message screen. Instead of following the instructions on screen I just hard rebooted my machine 🥱.

My most recently used desktop environments before trying KDE have been MacOSX, Gnome and Cinnamon. A common trait they share is that each have a pretty similar Alt+Tab look and feel, a style I appreciate.

KDE has a variety of application launchers to choose from, but in my opinion none of them look quite as visually appealing. With the Large Icons the spacing sometimes looks off, and app icons will occasionally look blurry or missing completely, on the other hand the Small Icons switcher is simply way too small. I've settled on using the default Breeze switcher, which I initially had an aversion to due to it's placement on the left hand side of the screen.

I think this is partially my fault for using Flatpak applications and expecting the desktop integration be 100% seamless. I strongly suspect it might also be an upstream issue (and not the fault of KDE itself), but I've not encountered similar issues on Gnome/Cinnamon.

Krunner vs Application Launcher vs Overview

The functionality offered by all of these launchers appears to completely overlap. So I'm not sure when I'd opt to use one over the other? This is obviously just a skill issue, but I think I prefer the unified search implementation offered by Gnome shell which removes any ambiguity.

Occasionally I'll search for something and what I'm looking for will be the second most relevant result, which can be frustrating.

Example A: If I type word "mouse" to bring up the settings panel to configure my mouse, the first two characters "mo" returns a list of results where Htop is the most relevant. 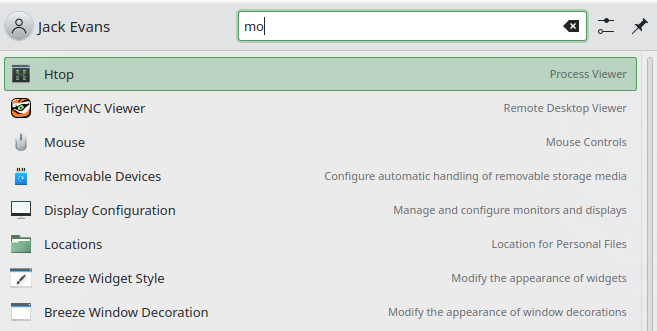 Example B: If I type "settings" the top result is Steam settings. In 99% of cases, this is never the result I want. I feel like KDE built-ins should take precedence here. Or perhaps there should be reserve words that prevent third-party applications from appearing as the top result. 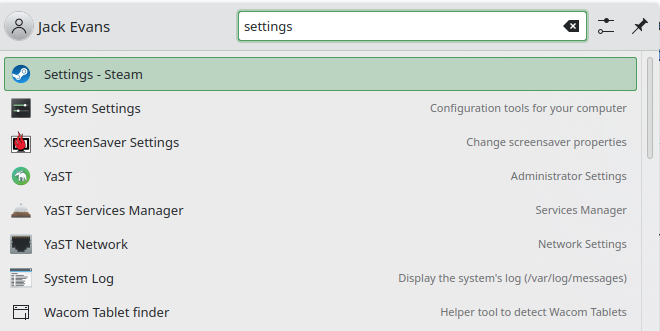 Example C: If I type "Downloads" I get x3 results. If I want to open my ~/Downloads folder in Dolphin which one is correct?

In this scenario the first result opens up a KDE Settings Panel to change the default Download location (unlikely what I want). The second two results are equivalent, likely from two search plugins returning the same thing.

All very minor things, but it frequently makes me double take before I hit the <enter> when searching, which can be annoying.

I disabled a majority of the enabled search plugins very early on to try and improve the experience, speed up the search and provide more relevant results. But I still run into occasional issues like this.

There's a good chance that my muscle memory from other desktops is tainting my experience on KDE. But I do think both the Gnome and Cinnamon desktops to a better job of this out of the box. On Cinnamon I would blindly hit <super> start typing then slam <enter> without thinking and it would somehow always do the right thing.

Overall my experience so far with KDE has been overwhelmingly positive, despite some of the criticism covered in this article. It's great to see how far the desktop has improved since I last used it, and I'm excited to see where the project goes in the future, especially with KDE 6 on the horizon.

I plan to stick with KDE for the foreseeable future, or until I get the nagging urge to jump ship and try something new :P